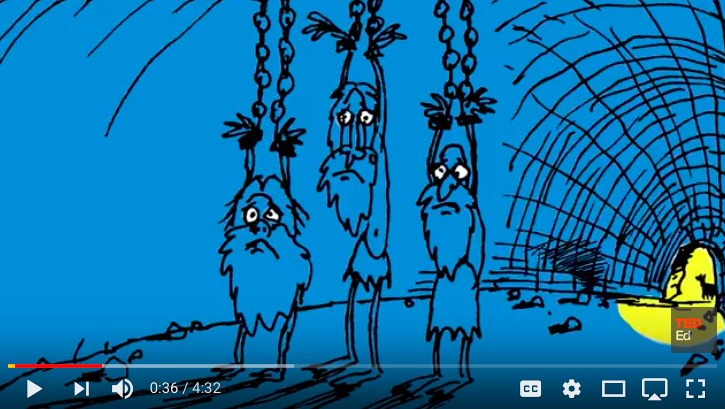 Perspective. This is a word we use often when we delve into the fundamentals of media literacy. Whose perspective are we getting, and who is in control of the message? How is this perspective different from what we are used to? Are many perspectives being considered?

Over the last few semesters, I’ve found myself gravitating toward two ancient texts in almost all of my classes–“The Blind Men and the Elephant” and “The Allegory of the Cave.”

“The Blind Men and the Elephant” (Indian Folk Tale)

This folk tale illustrates the power of perspective. The blind men in this tale are certain of their truths of the elephant, and grow angrier and angrier when the others insist their perspective is the correct one. Students almost immediately connect this story to how we behave on social media–we have our own perspectives and opinions and tend to be so certain of ourselves that if we are challenged or asked to hear another perspective, we react harshly. We are stubborn, and we do not want to be wrong.

While this conversation sets the tone for the class discussions ahead (the importance of listening to others without becoming combative), it’s also an important lesson in the journalism and mass media classroom. How can a story be complete if we only listen to one perspective? How can we experience the whole “elephant” if we only listen to one loud voice? Unless we listen to one another (and actively seek out different perspectives), we are doomed to be not only wrong, but angry and wrong at the same time. This message powerfully complements “The Danger of a Single Story,” which is another media literacy classroom staple. By our second day in class, our Diversity in the Media class was having lively conversations about stereotypes and the need to seek out the entire elephant (whether as a consumer or a producer of media).

“The Allegory of the Cave” (Plato) – Text

“The Allegory of the Cave” (Plato) – TED Ed Animation

Plato’s “Allegory of the Cave” is yet another interdisciplinary magic bullet. In the millennia since Plato wrote Republic, “The Allegory of the Cave” has been interpreted in a myriad of ways, from the transformative power of education to challenging the notion of democracy. While it seems like a heavy text for young readers at first, the basic concepts of the cave–the chains, the shadows and then the pain and ultimate freedom of the truth–are easy to grasp, and work well in classrooms that tackle issues of representation.

In the journalism and mass media classroom, we can look at the allegory in two ways: from the perspective of the prisoner, and the perspective of the freed prisoner. When we look at the prisoners, who rely only on the shadows to see the truth, we talk about how those representations are all the prisoners know, thus the shadows are their truth. If we only see shadows (or faulty media representations), how do we know the truth? The freed prisoner, who must face the pain and discomfort of seeing reality (first in reflections, and then the “truth” of the sun itself), goes back to the prisoners to share what he’s experienced, but they react violently and with disbelief. He dismisses their perspective, and they cannot understand his. We talk here about the freed prisoner who comes back as the journalist, who has the difficult but important duty of attempting to relay the truth to an audience who hasn’t seen it and might not believe it. Again, we revisit the themes of perspectives, and our reliance upon “reflections” and stories to see the world around us, and our harsh reactions if what we’ve always known is challenged.

The TED Ed video (linked above), is a great, short explanation of the allegory in an easy-to-understand animation. The first three minutes are especially helpful to frame conversations about the role and responsibility of individuals to seek the truth, and for journalists to accurately convey the truth–even if those processes can seem uncomfortable.

Our work demands that we be ready to tackle current issues and current problems in the classroom, and the need for news literacy and media literacy education is only becoming more urgent. Sometimes we can find the best tools for centering our curriculum and our conversations via voices from the past.