Combating Apathy in an Era of “Fake News” and Standardized Testing 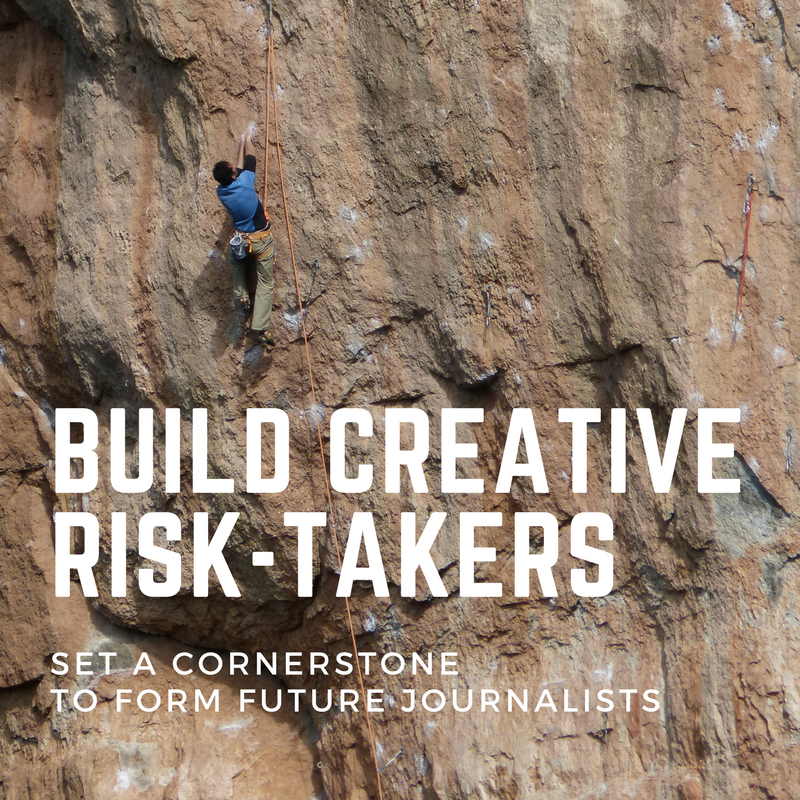 Fake news. Bias. Alternative facts. Journalism is under attack, and our students certainly feel the apathy that results in this constant cycle of distrust. For students who might be interested in journalism, the job market seems dubious and there’s been increasing vitriol about mainstream news outlets being “fake news.” These realities and fictions affect morale about the field, to be certain, but larger trends in education also threaten the ways in which young people could and should be encouraged to critically consume and creatively produce media.

We need to make it clear to students—and all media consumers—that mistakes do not equal “fake news.” Fake news is a real phenomenon that’s been mischaracterized as a propaganda device. Mistakes are to be avoided at all costs, and accuracy and transparency is key, but mistakes are also human.

In his popular 2006 TED Talk, “Do Schools Kill Creativity?” Ken Robinson says that,

“…kids will take a chance. If they don’t know, they’ll have a go. Am I right? They’re not  frightened of being wrong. I don’t mean to say that being wrong is the same thing as being  creative. What we do know is, if you’re not prepared to be wrong, you’ll never come up with  anything original—if you’re not prepared to be wrong. And by the time they get to be adults, most kids have lost that capacity. They have become frightened of being wrong… We stigmatize mistakes. And we’re now running national education systems where mistakes are the worst thing you can make. And the result is that we are educating people out of their creative capacities.”

In journalism, creativity and risk-taking are key skills. Curiosity, critical thinking, problem-solving, patience, listening, empathy—all of these traits should be encouraged and nurtured, yet these often run counter to what teachers have the time and pressure to focus on.

This convergence of a national erosion of trust for the media, “dwindling resources” in newsrooms, the 24/7 news cycle and an increased focus on standardized testing in our school systems add up to a dire situation for our ability to empower students to be savvy news consumers and inspired producers. Research has also found that teachers report having much less time to discuss the news or use news in the classroom because of how much “teaching to the test” that is required in a landscape dominated by standardized testing.

In all fields—from education to engineering to journalism—creativity is the cornerstone to innovation.

If we are actively eroding the possibilities to express creativity in our society, while increasingly stigmatizing mistakes (whether it’s in the classroom or Twitter rants against “The New York Times”), we are going to continue to see young people who care less and less about the news media, much less being interested in participating in it.

In the excellent and essential book, “The Elements of Journalism,” Bill Kovach and Tom Rosentiel describe journalism as a pursuit of truth. They stress that we have a fundamental misunderstanding of objectivity and neutrality. As humans, we can’t be free of bias or truly be objective. Instead, we must use objective methods to verify and test information.

If we encourage students to be creative and have unique ideas, this objective methodology—not objective storytelling—is key. Explaining this concept to students can emphasize the human element that is necessary (yet sometimes fallible) in good journalism.

If we as educators can carve out niches for our students to be empowered to be creative and accurate, and to be interested and critical, we can try to combat the barrage of apathy-inducing messages that our students seem to be faced with from every angle.

2016 Lie of the Year: Fake news at PolitiFact
“Mistake News Isn’t Fake News, but We Can’t Let Trump Make News the Story,” by Stuart Warner at Phoenix New Times
TED Talk: “Do Schools Kill Creativity?” by Ken Robinson
“Survey Finds Teaching to the Test Has Negative Impact on Use of News in Classrooms: Carnegie-Knight Task Force Urges More Emphasis on Civics Education” at the Knight Foundation
“The elements of journalism” at American Press Institute