Looking in the media mirror 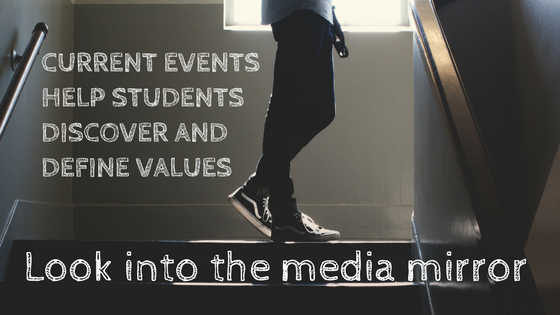 I have more than 20 years of experience as a journalism adviser, yet I find the current school year to be very different from previous years. From the rollercoaster of political events to the treatment of journalists across our nation, every week there are new issues to tackle. It makes navigating the waters of teaching journalism a whole new experience.

In discussions with other advisers over the winter, I mentioned one positive note to all this. It’s as if a mirror has been held up to people of all ages; one that we find ourselves looking into and discovering what we value and what we do not.

I shared that sentiment with my broadcast class and some of my photography students. Some of them shared their thoughts with each other under the rule that none of them were to argue or try to change each other’s minds. They should simply listen to each other.

My students were able to accomplish a feat that I’ve witnessed many adults fail at; have an open discourse without belittling each other or ending friendships. It was refreshing to see. Perhaps you, too can attempt such a discussion. What can you expect? It will vary, but here are a few of my students’ candid responses as an example:

“Watching the continuing situation at Standing Rock has shown me that I care more deeply about the rights of Native Americans than I ever realized. Sacred places should remain sacred.”

“The coverage of mass shootings has shown me I care about gun control. You don’t need to walk around with a military-grade weapon.”

“I have learned that hypocrisy bothers me.”

“It bothers me that journalists are being silenced. We are supposed to keep our government in check.”

“Not all Muslims are terrorists. Many live here and contribute to our society.”

“It bothers me when people think the president is EVERYTHING in our government.”

“With Brock Turner and the comments made by President Trump in reference to women, I don’t understand why so many young men do not understand the Women’s March or act like feminism is a joke.”

“Tensions are high in my friend group now. Used to, we could agree to disagree on abortion, but now it’s dividing us deeply.”

“It bothers me that people will pull out a cell phone and video a police officer simply doing their job. Even little things, like pulling someone over for speeding, are being filmed and put on social media. They show zero respect for law enforcement. I know that there are many sides to a story, but the inability to trust or respect those in authority seems excessive these days.”

“I realized that my values are not totally in line with my family’s values. At times, I think they believe I am just trying to be defiant, but I am not. I cannot believe how upset they are about bathrooms. Who cares who uses what bathroom? Aren’t there more important problems to worry about than that?”

“I have grown up being told I can be whatever I want, but I believe when men get away with rape or hateful speech that puts down women just because they are white and rich, that totally strips me of being whatever I want to be. I want to be a person who feels safe and valued, not someone who should be afraid of someone taking advantage of me at a party because I am a woman or only hiring me for a job because of my looks and not my brain.”

“I have learned that people use the word ‘media’ too much. What happened to calling it journalism? There’s a big difference between the two. When I think media, I think celebrity gossip. When I think journalism, I think NEWS that MATTERS.”