Teaching All the President’s Men to a New Generation

In my news writing course, much of our focus is on interviewing, grammar and AP style. It’s more of a skill-and-drill class than any of my other courses, and I sometimes struggle with stimulating or maintaining student passion about the discipline (much more so than, for example, Diversity in the Media, or my other courses that focus on critical analysis via Socratic seminar).

Since news writing is a gateway course to higher-level journalism courses, the rigor and focus on skills is important. However, this semester I integrated more historical perspectives and current commentary about the news media to highlight the dire importance of the profession. Resources ranging from the Annenberg Classroom’s “Freedom of the Press” video to the John Oliver “Journalism” segment enriched our conversations about the importance of the news media, especially in a climate where “fake news” and “alternative facts” are disillusioning our students to the power of the press. 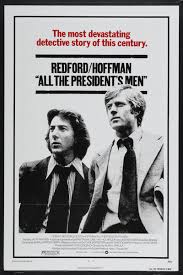 Throughout our school years, “movie days” are often seen as treats or rewards, and not necessarily legitimate academic pursuits. However, using feature films in the classroom is a powerful and legitimate way to tackle many of our interdisciplinary goals: history (whether the film is based on a true story or exemplifies a historical period), storytelling, critical analysis, rhetoric and creative choices (music, cinematography, colors, etc.) can all be examined through the lens of a camera. “Good Night, and Good Luck” is an excellent choice for the classroom, as is “Citizen Kane,” to foster discussions about the history and power of the news media (as well as the money and politics involved). For news writing, however, I knew that the students needed to examine “All the President’s Men”–a beautiful film that celebrates the hard work and world-changing capabilities of investigative journalism, and also pays homage to the power of young “hunger” that our students need to find.

Screening the film was an excellent use of two class periods. I gave them the original New York Times film review as an example of journalistic film criticism, which appears under “Resources” below. Their writing assignment–which was low-stakes and brief–was to write a film review while reflecting on the film’s meaning to students in 2017. Below, you will find some excerpts from their papers.

There are many ways to approach teaching “All the President’s Men,” depending on the class, students’ ages, current events and time constraints. The “Lesson Plans” section below includes a plethora of ideas. I will certainly use this film again, as one might expect from the students’ words below. I could feel their excitement in the classroom after the film was over, and it resonated from their typed pages. Sometimes the best way to have our students engage with the present is to look to history, and watch it on the big screen.

In their own words (used with permission):

“The most memorable line in the movie came from the editor when talking about Woodward and Bernstein, fighting for their opportunity to write the story. ‘They’re hungry. Don’t you remember when you were hungry?’ … The film was powerful, and inspiring to student journalists who could be fearing the future of media in the current political climate. It returns focus to the true meaning of media, the fourth estate, and its duty to bring truth to people. The movie can be inspiring for people pursuing any career, as it teaches determination and persistence. Woodward and Bernstein represent what it is like to start a career and work toward the type of work you want to do.”

“Months of tireless and persistent reporting done by Woodward and Bernstein, realistically portrayed by the film, eventually lead to the resignation of President Nixon before he could be impeached. Their work, throughout the investigation, was not hindered but fueled by the government officials that denied each newly exposed tidbit of information in the hopes of discrediting “The Washington Post” in the future. Watergate … The press’ first and most imperative responsibility is to keep citizens informed and to protect them from any malicious intentions.”

“There is not a single scene that shows our two protagonists doing anything besides working, besides a few moments where they break to eat some fast food (while discussing the story). This evokes a feeling of tireless effort. Their work has devoured their personal lives so far as the film is concerned. … There are so many scenes in which we see our two journalists sitting in a room typing while being overwhelmed with the vociferous clacking and dinging of typewriters. It’s almost too loud, which I believe is exactly the intent of the filmmakers. The very immersive and visceral experience really puts us in the shoes of the protagonists. Another moment worth mentioning are the final moments of the film. The TV in the office is blaring, showing the re-election of Nixon, on an equal level of volume is the intense sound of typing going on. Our protagonists are currently typing what would end Nixon’s political career, which is in a beautiful juxtaposition to what’s occurring on the television. The sound shifts, as the TV becomes quieter and the typing becomes louder, the sound even starts to distort as we’re shown a very zoomed in view of a typewriting sticking the nail in the coffin of the story.”

“The two pursue anyone that may provide insight into the scandal and ultimately turn what seemed to be just a burglary, into a national story because of their perseverance in delivering an accurate news story… For aspiring journalists, this film depicts in-depth examples of how they can expose the truth and provide justice.”